When kids suffer from illness after illness all winter long, parents understandably get frustrated. Believe me, as a parent and a physician, I get it. Do you know what doctors want you to know  about treating colds?

This is a change from my usual blogging style because I want to share a Facebook post. I follow a few private Facebook Groups and in one for physicians the following post was shared. I tracked down the original author for permission to share publicly. He was not intending for this to reach a wide audience, but authorized me to share without his real name. He asked that I refer to him as Dr. Nate.

I did not write anything in the post or the comments I posted below, but I see value in it. It highlights the fears and desperation of many parents and the frustration that even doctors have in treating coughs and colds.

It might offend some because of its snarkiness, but it might help parents who are frustrated that their child is sick… again.

As you can see, Dr. Nate answers questions about treating a child’s cold and cough rather bluntly, but from the many, many positive responses, rather accurately. It’s a behind-the-scenes look at what doctors really want to say but can’t.

I’ll first post screenshots of the post and some of the replies (there were also GIFs and more comments of essentially the same “love it” responses) and then I copied the wording below for ease of reading. 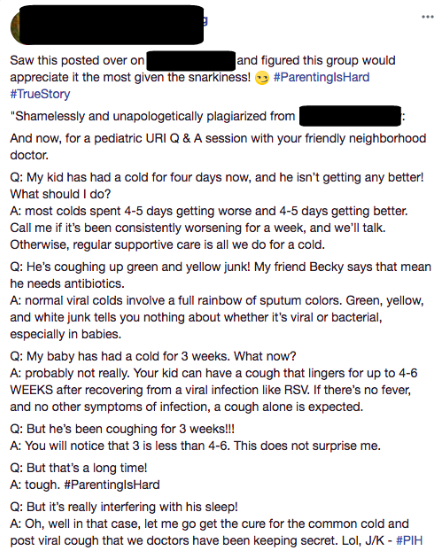 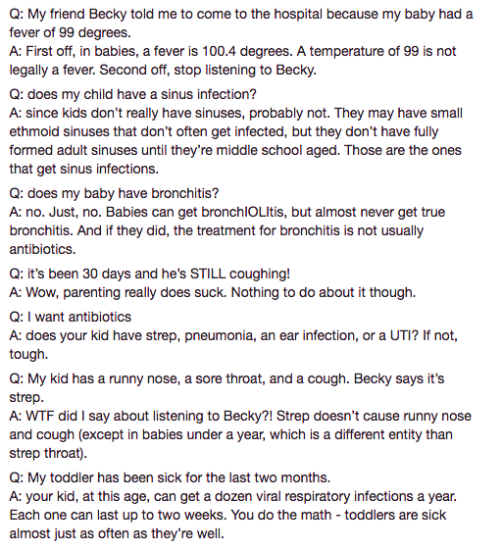 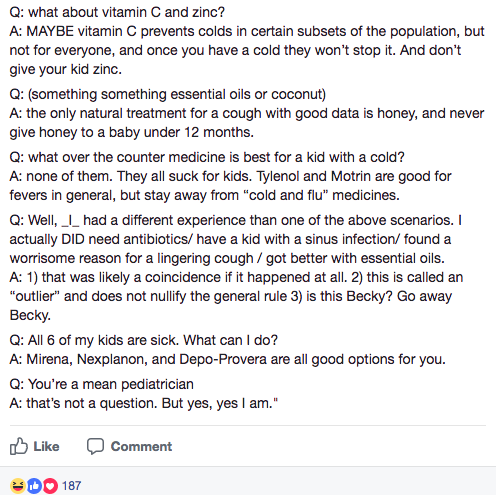 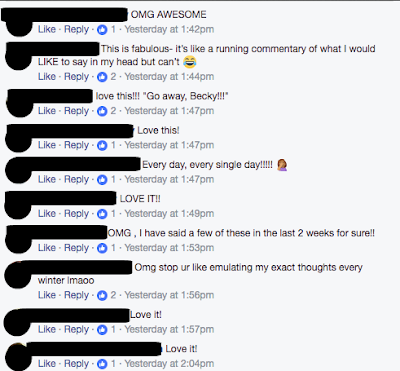 Saw this posted over on ********* and figured this group would appreciate it the most given the snarkiness!

“Shamelessly and unapologetically plagiarized from ***********:
And now, for a pediatric URI Q & A session with your friendly neighborhood doctor.
Q: My kid has had a cold for four days now, and he isn’t getting any better! What should I do?
A: most colds spent 4-5 days getting worse and 4-5 days getting better. Call me if it’s been consistently worsening for a week, and we’ll talk. Otherwise, regular supportive care is all we do for a cold.
Q: He’s coughing up green and yellow junk! My friend Becky says that mean he needs antibiotics.
A: normal viral colds involve a full rainbow of sputum colors. Green, yellow, and white junk tells you nothing about whether it’s viral or bacterial, especially in babies.
Q: My baby has had a cold for 3 weeks. What now?
A: probably not really. Your kid can have a cough that lingers for up to 4-6 WEEKS after recovering from a viral infection like RSV. If there’s no fever, and no other symptoms of infection, a cough alone is expected.
Q: But he’s been coughing for 3 weeks!!!
A: You will notice that 3 is less than 4-6. This does not surprise me.
Q: But that’s a long time!
A: tough. #ParentingIsHard
Q: But it’s really interfering with his sleep!
A: Oh, well in that case, let me go get the cure for the common cold and post viral cough that we doctors have been keeping secret. Lol, J/K – #PIH
Q: My friend Becky told me to come to the hospital because my baby had a fever of 99 degrees.
A: First off, in babies, a fever is 100.4 degrees. A temperature of 99 is not legally a fever. Second off, stop listening to Becky.
Q: does my child have a sinus infection?
A: since kids don’t really have sinuses, probably not. They may have small ethmoid sinuses that don’t often get infected, but they don’t have fully formed adult sinuses until they’re middle school aged. Those are the ones that get sinus infections.
Q: does my baby have bronchitis?
A: no. Just, no. Babies can get bronchIOLItis, but almost never get true bronchitis. And if they did, the treatment for bronchitis is not usually antibiotics.
Q: it’s been 30 days and he’s STILL coughing!
A: Wow, parenting really does suck. Nothing to do about it though.
Q: I want antibiotics
A: does your kid have strep, pneumonia, an ear infection, or a UTI? If not, tough.
Q: My kid has a runny nose, a sore throat, and a cough. Becky says it’s strep.
A: WTF did I say about listening to Becky?! Strep doesn’t cause runny nose and cough (except in babies under a year, which is a different entity than strep throat).
Q: My toddler has been sick for the last two months.
A: your kid, at this age, can get a dozen viral respiratory infections a year. Each one can last up to two weeks. You do the math – toddlers are sick almost just as often as they’re well.
Q: what about vitamin C and zinc?
A: MAYBE vitamin C prevents colds in certain subsets of the population, but not for everyone, and once you have a cold they won’t stop it. And don’t give your kid zinc.
Q: (something something essential oils or coconut)
A: the only natural treatment for a cough with good data is honey, and never give honey to a baby under 12 months.
Q: what over the counter medicine is best for a kid with a cold?
A: none of them. They all suck for kids. Tylenol and Motrin are good for fevers in general, but stay away from “cold and flu” medicines.
Q: Well, _I_ had a different experience than one of the above scenarios. I actually DID need antibiotics/ have a kid with a sinus infection/ found a worrisome reason for a lingering cough / got better with essential oils.
A: 1) that was likely a coincidence if it happened at all. 2) this is called an “outlier” and does not nullify the general rule 3) is this Becky? Go away Becky.
Q: All 6 of my kids are sick. What can I do?
A: Mirena, Nexplanon, and Depo-Provera are all good options for you.
Q: You’re a mean pediatrician
A: that’s not a question. But yes, yes I am.”