Who would think they would focus so much on poop as new parents do? Color. Consistency. Frequency. So many things to worry about with infant poop! One of the most common concerns I hear is that a baby who used to poop several times a day stops pooping for days at a time. They might have a bowel movement (poop) just once a week – sometimes less. That worries parents, but constipation isn’t defined by how often babies have a bowel movement.

During the first few days of life the stool looks black and is thick. This is called meconium. It occurs in both breast fed and formula fed babies. 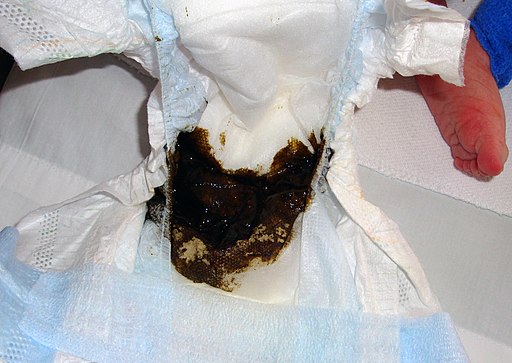 After the first few days there is a period of transition stool. The stools become more green and sticky. This is the meconium mixed with breastmilk or formula stools. It happens earlier in formula babies and after mother’s milk comes in for breast fed babies.

2nd week and beyond

After the transitional stools, the stools will vary in color and consistency depending on if the baby gets breastmilk or formula.

If breast milk is the primary food, the stools can vary quite a bit. They often look like yellow cottage cheese, with a lot of liquid and chunks. It often becomes a bit thicker (like pudding) as a baby gets older.

Breast fed stools can vary in shades of yellow to brown or green, often changing depending on what the mother ate. Bright green and frothy stools can indicate a low fat diet in a breast fed baby.

The fore milk has less fat than the hind milk, so if the baby consistently has frothy bright green stools we will monitor the baby’s weight closely to ensure adequate growth and evaluate the amount of milk the mother is producing and baby is drinking. Green milk is not necessarily problematic though.

A breastfed baby might have a bowel movement every time he eats (and in between) or he might go less than once a week. (Watch out when it finally comes – it often escapes the diaper!)

If a baby is taking formula, the stools can look shades of yellow and brown and be the consistency of peanut butter, pudding, or thick oatmeal. Formula fed stools tend to smell more foul than breast milk stools, but even breast fed baby poops can stink.

Most formula fed babies have a bowel movement 1-3 times a day.

Babies who get some breast milk and some formula can have characteristics of each feeding type.

After 4-6 months your baby can start solid foods.

Once a baby eats solids (or pureed foods) the stools can thicken a bit but should never be hard. They usually become more foul-smelling at this time.

Sometimes chunks of food (especially carrots, corn, and raisins) can be seen in the stool. This is normal.

If a baby takes an iron supplement the stools might turn dark green or black. This is normal and not a concern.

This does not happen from the amount of iron in baby formula. All formula should have iron. It is an important nutrient for all babies and low iron formula is not recommended.