Did you know there’s a name for the super swollen male parts from bug bites? Actually two names: Summer Penile Syndrome and Lion Mane’s Penis. Doctors might even call it seasonal acute hypersensitivity reaction. If you’ve ever seen it, you know it can be quite impressive.

What is summer penile syndrome?

Summer penile syndrome is a fairly common concern during the summer months. It’s usually due to a chigger bite on the sensitive skin of the penis or scrotum. You can often find a small bug bite near the center of the swelling.

They can itch like crazy, but usually don’t interfere with urinating.

Despite the significant swelling, there isn’t usually much pain, only itching. Unless there’s a secondary infection, there won’t be any fever.

What is a chigger?

Chiggers are a type of mite, which is an arachnid in the same family as spiders and ticks. They are also called harvest mites, harvest bugs, harvest lice, mower’s mites, or red bugs. Chiggers are so small they often go unnoticed until several hours after they attach to our skin. They can attach even under clothing, and the most common places that we notice chigger bites are in the areas of our pants.

Chiggers live in moist, grassy and wooded areas. They are commonly found in the warm summer months.

Adult chiggers don’t bite. It’s the larvae that cause itchy problems. The larvae are red, orange, yellow, or straw-colored, and no more than 0.3 millimeters long. 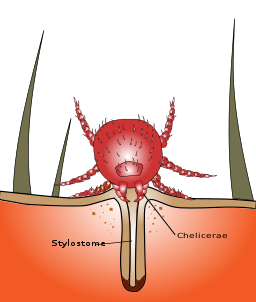 After crawling onto the skin, the larvae inject digestive enzymes into the skin that break down skin cells. They do not actually bite the host even though the bumps are called chigger bites. They form a hole in the skin called a stylostome. Their saliva goes into deep skin layers, which results in severe irritation and swelling.

People usually start to itch within a few hours and often scratch the feeding chiggers away. A hot shower with plenty of soap will kill chiggers and prevent them from finishing their meal, so showering after being in grassy or wooded areas can help prevent deeper reactions.

The good news is that in the US, chiggers are not known to carry diseases.

Even though they don’t cause disease, chigger bites are something to avoid because they can cause significant itching for weeks.

Bug sprays with DEET will deter the chiggers. DEET is approved for use in children over 2 months of age.

Clothing can be treated with permethrin to avoid ticks and chiggers. Permethrin can be purchased at sporting goods stores to pre-treat your clothing. It should not be used directly on skin. Once dried into the clothing, permethrin will last for about six washings. You can also treat your shoes, which makes a lot of sense since chiggers are usually found in the grass and crawl up onto your skin.

Even untreated clothing can help a little if you don’t have time to pre-treat with permethrin. Wear long sleeves and long pants. Be sure to tuck the pant legs into your socks so they can’t enter from the bottom leg hole.

For more on bug sprays, including citronella, picaridin, oil of lemon eucalyptus and more, see the EPAs information on registered and unregistered products. You can even use this handy tool to find the right product for your needs.

How do you treat chigger bites?

Much like any bug bite, control of the itch is important. If kids scratch any itch, it can become secondarily infected from the break in the skin allowing germs in.

Antihistamines are used for allergic reactions. We commonly use them for seasonal allergies, but they can help most allergy reactions.

Bug bites itch when our bodies react to the saliva injected into our skin with histamine. Histamine is our body’s allergic response and it itches. If you aren’t allergic to the bite, you won’t itch from it. This is the way we react to allergies, which is why we get itchy eyes and noses with allergies to pollen.

Diphenhydramine (Benadryl) is a short acting antihistamine that can help control allergic reactions, but tends to make kids tired or wired. It also only lasts a few hours, which can require frequent dosing.

I don’t like topical antihistamines, which are often sold to treat bug bites. I worry that kids will get too much of the medicine when it is applied to each bite. It’s a low risk, but still a risk. Just because they aren’t taking it by mouth doesn’t mean it isn’t absorbed. Children using a topical antihistamine for an extended time over large areas of the skin (especially areas with broken skin) may be at higher risk, especially if they also are using other diphenhydramine products taken by mouth or applied to the skin.

I am a fan of using an oral long-acting antihistamine, such as cetirizine or loratadine, to treat bug bites. Most kids with one bug bite have many. One dose of an oral antihistamine helps to control the overall histamine reaction, making each bite itch less.

Despite the significant swelling, these usually do not require prescription antibiotics.

If your child has open areas from scratching the skin, you should keep the area clean and consider using a topical antibiotic ointment to help prevent infection.

Over the counter topical hydrocortisone is a very low dose steroid. It can be used on insect bites to help stop the itch.

Stronger steroids that require prescriptions are occasionally used, but you will need to see your physician to discuss the risks and benefits of prescription steroids.

Soaking in an oatmeal bath might help the itching. It works very well for dry skin conditions and sunburn relief as well.

You can buy commercially made oatmeal bath products or you can grind regular plain oats to make it fine enough that it dissolves in bath water. Test a small amount in a cup of water to see if it’s finely ground enough before putting 1 cup of oats into the bath water.

Some people have even made a paste of oats and applied it directly to the itchy skin for relief.

Another kitchen remedy for bug bite itch relief is baking soda. Mix a pinch of baking soda with a few drops of water to make a paste. Put this paste on the bites. Reapply as needed.

One more kitchen treatment is ice. Many kids won’t tolerate this one, but if they can’t tolerate an ice pack placed over clothing, you can try applying a cool wet washcloth directly to the skin.

When should you see your doctor?

If your child has any of the following symptoms, talk with your doctor.

One reply on “Summer Penile Syndrome”

When I sat down on the ground to care for my cat, I felt bugs crawling on my leg – I was in shorts. Thinking it was ants, I just brushed them away. Next morning my scrotum felt sore, but not itchy. It was like my skin was pinched constantly by my undershorts. Upon examination I found actual tiny holes in my skin, but no bugs. Apparently they had taken what they wanted, and left. I haven’t experienced chiggers in many years, but I remembered the old way to get rid of them. I washed very carefully, then painted the bites with “liquid skin” I keep around for minor cuts so if any remained, they couldn’t breathe and would die. In a day our two, I will peel the liquid skin away and use a topical three antibiotic creme to help heal the wounds. A lesson I had to re-learn the second time about chiggers the hard way.