Vaping risks have long been unknown, or at least downplayed. It has even been suggested that a smoker who wants to quit could use vaping to kick the cigarette habit.

When a mall kiosk vaping salesperson first called out to me while shopping with my then tween daughter many years ago, he got an ear full from both of us. I’m sure the sales guy targeted me because I was with an impressionable tween and he really wanted to peak her interest but couldn’t approach her directly. My daughter was young, but even her gut feeling was that this inhalational device was not smart or safe and she let him know it.

I’d like to take credit for raising her right, but that would imply that all the parents of kids who have fallen to the “vaping is fun and safe” propaganda somehow did something wrong. They didn’t. I’m just lucky that my daughter thinks for herself and generally makes safe decisions.

Fast forward to today and I can’t keep track of all of the severe lung disease reports and deaths attributed to vaping. When I started writing this, there were 250 cases of lung disease and 2 deaths. Now there are over 350 cases of severe lung disease and 7 deaths. No single device, brand, liquid or ingredient has been tied to all cases. Many of those afflicted have reported vaping THC though some only report using nicotine. It has been recently reported that vitamin E acetate is a potential cause, but investigations continue into the source.

Why are people calling vaping an epidemic?

In my state of Kansas alone, as of the first of this year, there have been at least 20 ER visits for patients with a history of vaping and concerns for significant lung disease. In 2017, 10.6% of Kansas high school students reported current use of electronic vapor products. The adult numbers are smaller, with 4.6% of those 18 years and older reporting current use of electronic cigarettes in Kansas.

This is a problem of young people.

Despite the fact that when electronic cigarettes came on the market and claimed to be a way for smokers to kick the habit, they have been marketed heavily to kids with enticing flavors. Many non-smokers have taken up the habit of vaping. After many years of declining nicotine use, the rates are now growing rapidly, mostly due to electronic cigarettes. 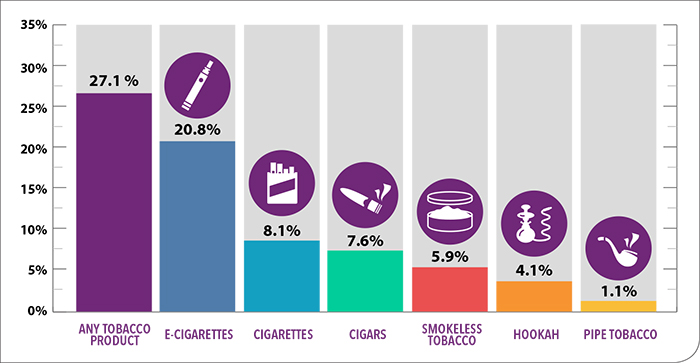 Since I last wrote about vaping in e-Cigarette Use in Our Kids about a year and a half ago, we are learning even more vaping risks. It’s never too soon to talk to your school children about the dangers.

Once they’re hooked it’s hard to stop, even if they want to. The number of regular adolescent users is growing at an alarming rate.

E-cigarettes come in many shapes and sizes. Most have a battery, a heating element, and a place to hold a liquid. They can hide in plain site because they look like common items, such as USB flash drives and pens.

There are many reports of these exploding while charging, in pockets, and even in the mouth of users.

What goes in the device?

E-cigarettes are usually filled with a liquid containing nicotine, which is highly addictive and harmful to the adolescent brain. Nicotine can impact learning, memory and attention span, and contributes to future addiction to tobacco and other substances.

The vape juices are flavored, and each flavor comes with it’s own chemical additives. Some of these are more irritating to the lungs than others, but all have potential side effects.

The FDA is finally working on getting non-tobacco flavored products off the market to help prevent new users from starting the habit.

Some seemingly resourceful people put other substances in their vaping device, but that is now being recognized as increasing vaping risks.

Teens have found that vaping THC, the chemical responsible for most of marijuana’s mind-altering effects, enables them to escape parental detection because they don’t smell like they do when they’ve smoked marijuana. They may vape cannabis-infused oils in place of e-liquids designed for the vaping device. They often end up consuming more THC than they would with a traditional joint.

Unfortunately vaping risks increase when the substance vaporized is not sold by an authorized retailer.

E-cigarette aerosol contains many potentially harmful chemicals regardless of the juice put into the device. These include ultrafine particles, volatile organic compounds, heavy metals (nickel, tin and lead) and other cancer-causing chemicals.

Vaping risks are much greater than initially recognized.

The vapor can contain substances that are addictive and can cause lung disease, heart disease, and cancer.

For many years there was no monitoring or tracking of complications from e-cigarette devices. After being available for about 10 years, the FDA requested that physicians report any possible lung disease related to e-cigarette use.

In a very short time hundreds of possible cases of lung disease has been linked to vaping from across the US. At least 7 people have died from illness related to vaping.

The majority of people with illness thought to be due to a component of vaping have vaped THC, but some only report vaping nicotine products.

What is this mysterious illness?

News reports are calling the lung problems associated with vaping a “mysterious illness” because no one knows the exact cause or mechanism of lung damage.

Symptoms can include shortness of breath, coughing, or chest pain. Some patients reported vomiting, diarrhea, or other stomach problems, as well as fever or fatigue. If you vape and have these symptoms, it is imperative that you seek immediate medical attention.

If you suspect you have an illness related to vaping, after you’ve been to a doctor, file a report with the Safety Reporting Portal.

Where to get help:

Unfortunately parents can’t use standard discipline techniques to get their kids to stop vaping once they are addicted. Addiction treatment is complex and difficult. Work with professionals.

Your child must be invested in stopping the habit or any treatment will fail.

A pediatrician might know local resources, such as therapists who have expertise in addictions. Your physician may also recommend medications to help stop the habit or refer to a physician who specializes is addiction.

Check out the many helpful tips on SmokeFree.gov for teens.

Vaping: What you need to know (KidsHealth)